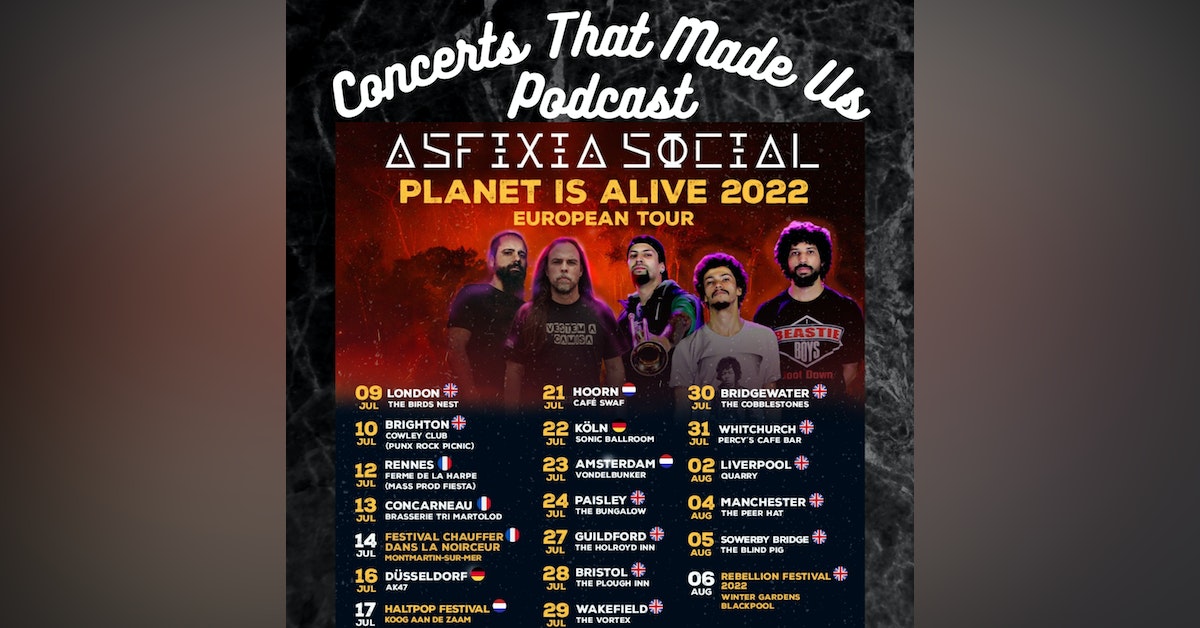 On this special episode Brian caught up with Brazilian rockers Asfixia Social ahead of their European and UK tour. After a series of successful shows in 2019, São Paulo based bruisers Asfixia Social are heading back to Europe and the UK for their Planet Is Alive 2022 tour, consisting of 20 performances in England, Holland, Germany, France and Scotland, between July and August. The Band will return to the iconic Rebellion (August 6), the biggest punk festival in the world, held in the English city of Blackpool, ending the tour after more than 10 shows in the United Kingdom. Asifixia Social will also perform at the 30th edition of the well-known French festival Chauffer dans la Noirceur, on July 14, Bastille Day (French national holiday), held on the beaches of Normandy in Montmartin-sur-Mer. Kaneda Mukhtar, lead singer of the band, explains the concept of the new tour: “the aggression of man has made the planet unstable and we are on the point of collapsing, we see this more and more frequently. Exhaustion consumption is a failed model and the planet is reacting. The Planet is Alive is a wake-up call.” After more than two years of the pandemic, the quintet returned to the studio, recording their first tracks in English to be released as singles which will eventually be released as the EP Planet is Alive, scheduled for February 2023. This year, Asfixia Social has already performed several shows with bands such as Cólera, Ratos de Porão, Detonautas and Dead Fish in São Paulo and Rio de Janeiro, warming up the engines with a new tracks as well as recent hits like “Revelação” and “Censura Não 2021”, a poignant protest against the current government. This will be the bands third international tour after 2019’s European tour and before that , 2014 had the guys touring Cuba where they recorded the documentary “Cuba Punk” (2015), which captures the local underground punk scene. Asfixia Social Europe tour dates ● Jul 09 - London (England) - The Birds Nest ● Jul 10 - Brighton (England) - Cowley Club (Punx Rock Picnic) ● Jul 12 - Rennes (France) - Mass Prod Fiesta ● Jul 13 - Concarneau (France) - Brasserie Tri Martolod ● Jul 14 - Montmartin-Sur-Mer (France) - Festival Chauffer dans la Noirceur ● Jul 16 - Düsseldorf (Germany) - AK47 ● Jul 17 - Koog Aan de Zaam (Netherlands) - Haltpop Festival ● Jul 21 - Hoorn (Netherlands) - Café Swaf ● Jul 22 - Köln (Netherlands) - Sonic Ballroom ● Jul 23 - Amsterdam (Netherlands) - Vondelbunker ● Jul 24 - Paisley (Scotland) - The Bungalow ● Jul 27 - Guildford (England) - The Holroyd Inn ● Jul 28 - Bristol (England) - The Plow Inn ● Jul 29 - Wakefield (England) - The Vortex ● Jul 30 - Bridgewater (England) - The Cobblestones ● Jul 31 - Whitchurch (England) - Percy's Cafe Bar ● Aug 02 - Liverpool (England) - The Quarry (with Moscow Death Brigade) ● Aug 04 - Manchester (England) - The Peer Hat ● Aug 05 - Sowerby Bridge (England) - The Blind Pig ● Aug 06 - Blackpool (England) - Winter Gardens - Rebellion Festival 2022 Get your tickets here: https://www.songkick.com/artists/5615728-asfixia-social Follow Asfixia Social here: https://www.asfixiasocial.com/ https://www.facebook.com/asfixiasocial/ https://www.instagram.com/asfixiasocial/ Find CTMU here: https://linktr.ee/Concertsthatmadeus  Newsletter: https://concertsthatmadeus.aweb.page/p/f065707b-2e34-4268-8e73-94f12bd2e938  If you would like to support the show you can do so by rating/reviewing us on Itunes and Spotify or by signing up at https://www.patreon.com/Concertsthatmadeus and you will gain access to a range of benefits including video versions of the episodes.https://concertsthatmadeus.aweb.page/p/f065707b-2e34-4268-8e73-94f12bd2e938 --- Send in a voice message: https://anchor.fm/ctmu/message